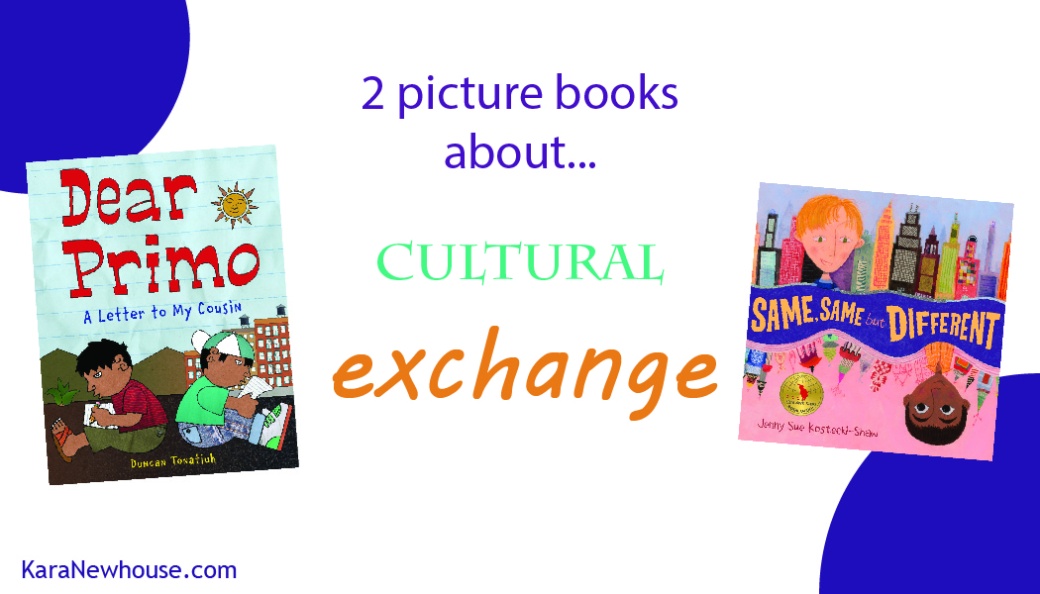 “Dear Primo” by Duncan Tonatiuh and “Same, Same but Different” by Jenny Sue Kostecki-Shaw would make great classroom books because of their focus on cultural exchange. The premise is in each is simple: two boys in different countries write each other letters comparing and contrasting various elements of their lives.

For instance, in “Dear Primo,” when Carlitos tells his cousin about riding his bicycle past dogs and cacti on his way to school in Mexico, Charlie counters with a description of a riding a subway, which “is like a long metal snake, and it travels through tunnels underground.” They go on to compare favorite snacks, games, holidays and more. Throughout the text, Carlitos’ notes are peppered with Spanish terms, like cohetes (fireworks), explained in a glossary at the back.

In “Same, same but Different,” Elliot, an American boy, and Kailash, an Indian boy are paired up as art class pen pals. Their words describe the similarities in their lives, leaving the illustrations to highlight the differences. For instance, in one spread, both boys say they like to climb trees. Elliot is shown waving from a tree house beneath an umbrella of red autumn leaves. Kailash in perched in a green, monkey-filled tree. Their exchanges are punctuated by a popular saying that Kailash teaches Elliott: “same, same but different.” In the end, they reverse the phrase: “We’re best friends … even though we live in two different worlds. / Or do we? / Different, different but the SAME!”

Which, of course, is the theme of both stories.

I can imagine using either of these books with children as an introduction to a culture, or as a mentor text for students to write about and illustrate their own lives. (The American boys are both depicted as living in cities, but that’s certainly not everyone’s experience growing up here.) Duncan Tonatiuh’s unique illustrations also could open a conversation about history, because his style is influenced by the Mixtec Codices. Those are documents on which the Mixtecs, a Mesoamerican group tracing back to 940 A.D., used symbols and pictures to record  history, biography, genealogy and ritual affairs. Getting into that would be for an older picture book audience, but I would have loved learning it as a kid.

Pen pal stories are a great format for showcasing cultures, but they aren’t the only way of doing it. What are you favorite books about a culture different from your own?