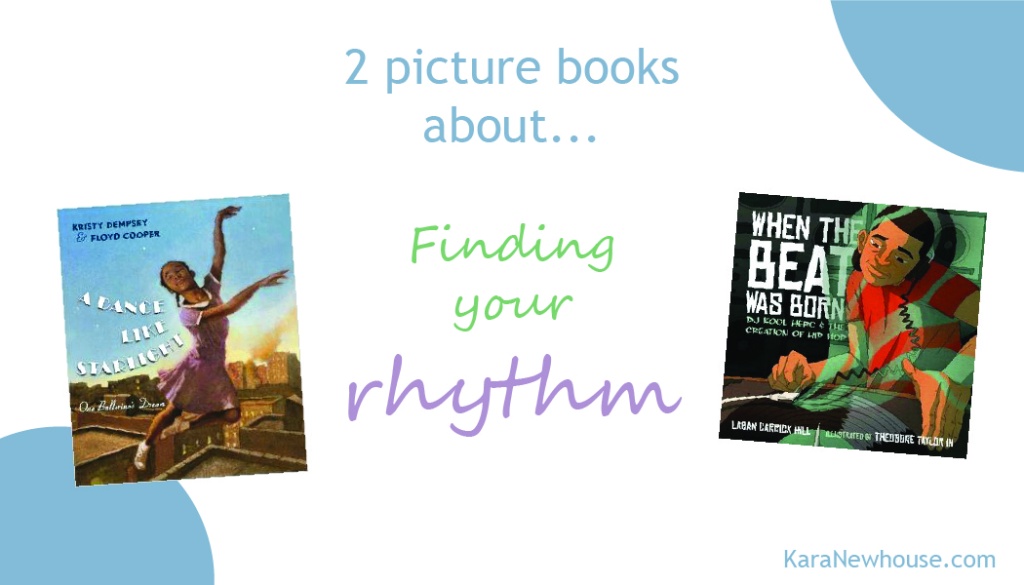 Arriving in the classroom, I heard music before spotting a mini-crowd of preschoolers break dancing on the circle carpet.

“Yeah, our classroom is a fun one,” the other teacher said to me by way of a greeting.

This was just one of the classes I worked in as a substitute Head Start teacher in 2011-12. The Head Start classrooms were always consciously stocked with diverse children’s books, but even though I was sometimes entertained by pint-sized break dancers and beatboxers, I never encountered a book about hip hop.

Hopefully some of those classrooms (or maybe their elementary school counterparts) have since acquired When the Beat was Born, written by Laban Carrick Hill and illustrated by Theodore Taylor III. Roaring Brook Press published it last year, and Taylor won this year’s Coretta Scott King/John Steptoe Award for New Talent.

This picture book biography tells the story of Clive, a boy in Jamaica who loves music that makes “his feet go hip hip hop, hippity hop.” As a teenager, his family moves to the Bronx, New York, where he grows to 6’5″ and acquires the nickname Kool Herc, short for Hercules. Taking his love of music to the turntables, DJ Kool Herc, develops a new sound. At parties, he keeps the dancing going longer by repeating the musical breaks in songs when the lyrics end. Break dancing, MCing and rapping develop alongside his new sound and it spreads across the country and around the globe. Ultimately, Herc “put the hip hip hop, hippity hop into the world’s heartbeat.”

I’m not familiar with the names and faces of early hip hop, so I loved getting this intro by way of DJ Kool Herc’s story. When the Beat was Born is a great choice for kids who grow up around hip hop or for exposing kids who don’t to a world beyond their own.

The second book in today’s post is A Dance like Starlight, written by Kristy Dempsey and illustrated by Floyd Cooper. Philomel Books (a Penguin imprint) published it this year.

An African-American girl narrates this fictional tale set in 1951 in New York. With a mother who’s a seamstress, the girl has grown up around costume fittings and rehearsals and harbors a dream to become a ballerina. The Ballet Master lets the girl join lessons from the back of the room, but she can’t participate in recitals. Eventually, the girl sees a picture of Janet Collins, the first “colored prima ballerina,” and her mother finds a way for them to see Collins perform at the Metropolitan Opera House. With every grand jeté of the performance, the little girl’s dream also soars.

A Dance like Starlight is gracefully written and illustrated to match the flowing dance of a child’s hopes and dreams. Dempsey points out in her author’s note that Janet Collins danced at the Metropolitan Opera House in 1951 — four years before Marian Anderson’s opera debut there, yet her name is lesser known. Perhaps ballet aficionados are familiar with Collins, but I’m glad Dempsey brought her name to the rest of our attention through a child’s eyes.